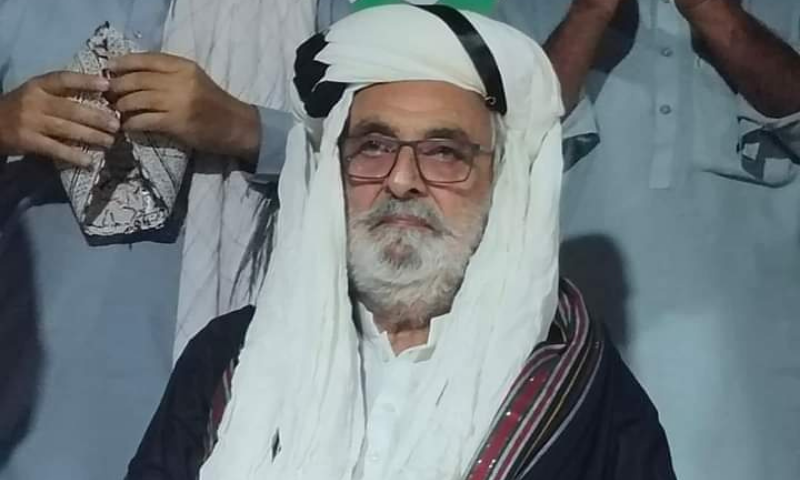 He was 74 and has left behind three sons and as many daughters to mourn his death.

Wrapped in party’s red and white flag, the icon of the Baloch nationalism and progressive was laid to rest in the afternoon of Thursday in the presence of a large number of people from all walks of life, including journalists, politicians, lawyers, trade unionists and leaders of peasant movement, as well as his party’s senior leaders and workers.

AWP Senior Vice President Advocate Akhtar Hussain said that Comrade Mustikhan, one of the closest companions of Baloch leader Mir Ghaus Bakhsh Bizenjo, had been suffering from liver cancer for the last few years and had recently decided to suspend regular chemotherapy treatment some months ago.
Life and struggle A lifelong and passionate advocate of the Baloch national movement as well as Pakistan’s working class, Mustikhan, was born in 1948, and lived his entire life in the metropolis of Karachi, twice running for elections from the historic Baloch area of Lyari.

His involvement with the daily struggle of Karachi’s multi-ethnic working class and local populations was prominent till his last days, most notably under the guise of the Indigenous Rights Alliance which organised anti-eviction campaigns against the land-grabbing antics of big real estate developers like Bahria Town.

Yusuf Mustikhan, whose most active years in political struggle were spent under the mentorship of MirBizenjo, was one of his closest companions throughout the high points of the National Awami Party government formation in Balochistan, signing of the constitutional accord in 1973, and also during the Hyderabad Conspiracy Trial after the dismissal of the NAP government.

Years later, when Mir Bizenjo passed away, Yousuf Mustikhan inherited the presidency of the Pakistan National Party (PNP) and remained leader of the progressive-nationalist formation until he joined hands with Abid Hasan Minto, Akhtar Hussain and other leftists to form the National Workers Party in 1999.

While the end of the cold war signalled for many the permanent demise of left politics, Yousuf Mustikhan remained steadfast in struggle against ethnic-national oppression, class exploitation and militarisation.
He was detained under colonial public order laws during the Musharraf rule in 2007.

In 2012, Mustikhan was one of the moving forces for the formation of the Awami Workers Party (AWP). At various points in the 10 years since the AWP’s creation, he served as its Sindh president, federal senior vice president and, finally, president.

As late as last year, even as he struggled against cancer, Mustikhan was on the frontlines of the struggle with his beloved Baloch people in Gwadar, spending time in jail under trumped up sedition charges for speaking at a sit-in of fisher folk in the coastal town.

Yusuf Mustikhan, an icon of Baloch nationalism and left-progressive ideals, spent all of his life embodying the principles for which he stood.

His final contribution to the progressive cause was a poignantreminder of hiscommitments. In June 2022, he presided over the formation of the United Democratic Front (UDF).