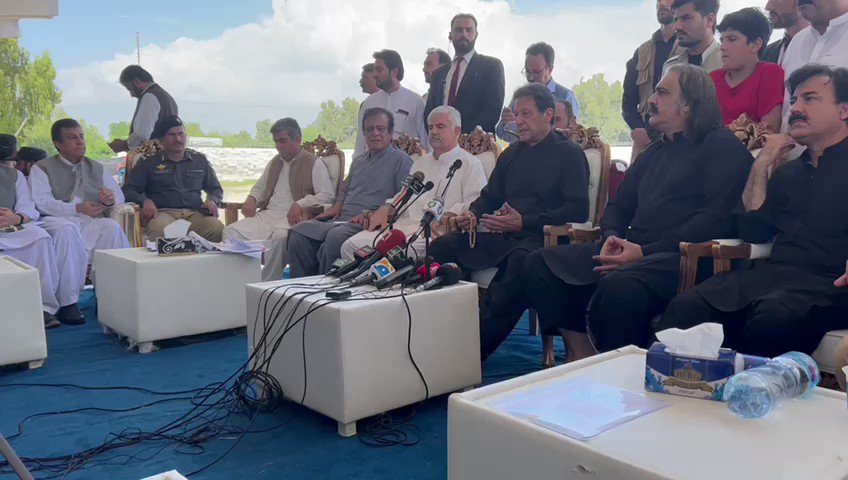 Pakistan Tehreek-e-Insaf (PTI) chief Imran Khan on Friday called for an immediate escalation of relief efforts for flood victims in Khyber Pakhtunkhwa as he visited the flood affected D I Khan and Tank Districts to oversee the situation and meet families that have been affected.

While talking to the media after inspecting the flood relief camp set up for the affectees at Ratta Kalachi Sports Complex on the occasion of his visit to Dera Ismail Khan, the PTI chairman said that the calamity has surpassed the destruction caused by the 2010 floods in Sindh.

“We used to think of the 2010 floods as an unimaginable catastrophe, but according to reports, the devastation and the loss of life caused this time is far greater,  the construction of dams is extremely important for Pakistan, what is the damage caused by floods, if there were dams this water would have played an important role in the development of the region but now the entire nation will have to bear the burden of the flood damage in Sindh and Balochistan, during my tenure I had planned to construct ten dams,” he said.

Mr. Khan said “I am under pressure to raise funds from the public for flood relief but I will not raise funds until I have a clear picture of whether I can spend the money fairly or not, our governments in Khyber Pakhtunkhwa and Punjab will actively participate in all possible relief activities for the flood victims.”

In response to a question, Imran Khan said the arrest is of the criminals and not of the innocent, the thieves are sitting outside the country and those who are here also have corruption cases on them, I am struggling to give real freedom to the people of Pakistan.

Chairman Pakistan Tehreek-e-Insaf (PTI) Imran Khan issued instructions to the Chief Minister Khyber Pakhtunkhwa Mahmood Khan to ensure immediate release of funds for the rehabilitation of the victims after assessing the losses of the victims on an emergency basis, he also appreciated the efforts of district administration and provincial departments.

Speaking on the occasion, Chief Minister Khyber Pakhtunkhwa Mahmood Khan said, the government of Khyber Pakhtunkhwa is with the flood victims and will not leave them alone in this hour of difficulty, an emergency has been imposed in the D I Khan District to speed up the rescue and relief activities and ensure better measures. Officials of rescue and other departments are being dispatched from nearby districts to D I Khan District so that timely relief activities can be carried out.

On this occasion, Commissioner Dera Ismail Khan Division Aamir Afaq gave briefing to the ex-premier and Chairman Pakistan Tehreek-e-Insaf (PTI) Imran Khan and Chief Minister Khyber Pakhtunkhwa Mahmood Khan about the flood situation and relief operations and related to the loss of life and property and damage to infrastructure caused by the calamity.

After that, Chairman PTI Imran Khan also met the flood victims at a relief camp set up at Degree College and issued instructions to the Chief Minister to provide full assistance to the Tank flood victims, to start work on the Gomal Zam Dam soon and to give the flood package soon to the affectees.